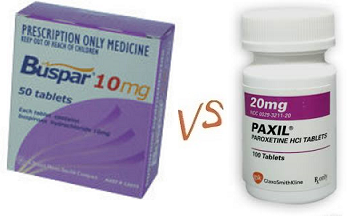 When you suffer from anxiety the world doesn’t look the same to you. To someone else who doesn’t have the problem they can go about their daily business not really having to be too concerned about certain situations. These are people who are in control. For someone who suffers from anxiety though the world seems like a very fast and frantic place. It seems like a world where they’ll get eaten alive if they don’t make the needed adjustments.

The person who suffers from depression is a little different. The person suffering from depression is in a depressed state of mind. As a result they don’t have the energy to be productive or to work at solving problems. They value things around them less and as a result the state of their lives and their surrounding deteriorate. This doesn’t have to happen if such a person gets the proper help.

This is where medications such as Buspar and Paxil come in. These medications are very good at helping anxiety sufferers and depression sufferers get their lives back on track by regaining control of their moods. If you want to get a prescription for one though you might be curious to know which one offers the better benefit. Well before we go into that let’s give a brief summary of what each of these drugs are.

Buspar is a prescription medication that helps fight the symptoms of anxiety. It’s a part of a group of drugs called anxiolytics, but it doesn’t work in the same fashion as drugs commonly found in this group.

Paxil is a drug designed to treat depression. It’s a part of a group of drugs called selective serotonin reuptake inhibitors. The active ingredient is Paroxetine and it works by being able to effect chemicals inside the brain that might be unbalanced.

So which medicational treatment is better for you?

The main reason why it’s so hard to know which one of these is the better option is because the severity of your condition might not be known. For a person who suffers from only a moderate form of depression or anxiety, either one of these drugs can have a serious effect on them and do a lot to help them. If someone suffers from an extreme form of anxiety or depression though, then either one of these drugs might not work as well or a higher dosage might be required. If this isn’t the case, then it can simply take longer for the drug to start working.

What you have to focus on if you’re serious about using Buspar or Paxil is whether or not you’ll respond to it well. If you don’t (meaning you allergic, suffer serious side effects, or your condition doesn’t improve) then you’ll have to be looked at in order to determine why you aren’t getting the desired effect. Besides from this both of these drugs are about equal in terms of effectiveness as long as they get taken in order to a doctors instructions.