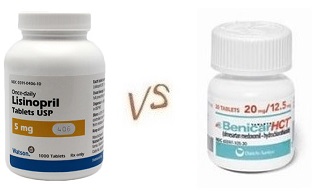 Benicar is a medication that’s main purpose is to treat high blood pressure problems. You can find it under the generic name Olmesartan. The drug is a part of a class of drugs called angiotensin II receptor antagonists. The way these work is that their able to help blood vessels to relax better. The drug also can help to treat heart failure problems or kidney disease.

Lisinopril is a generic version of a brand name drug called Zestril. It’s a medication that’s designed to help treat people who suffer from high blood pressure problems. Doctors will give out this drug alongside others also in order to treat congestive heart failure. It belongs to a class of drugs called angiotensin-converting enzyme inhibitors or ACE inhibitors. When used it helps to widen blood vessels, which enables blood to flow in a smoother fashion and allows the heart to work more efficiently.

Is there any reason why a doctor will decide to prescribe you one of these over the other?

In some cases a doctor might have a specific reason for deciding to prescribe you one of these over the other. The main goal is always going to be making sure your health isn’t furthur jeopardized in the process of trying to treat one problem. So if a doctor decides that you would be at a high risk because of taking benicar over lisinopril, then they’ll prescribe lisinopril and vice versa.

Is there any way to know if either of these is going to work better than the other?

When looking around to see what experiences others have had with each of these drugs, one common theme came up. People who took Benicar seemed to suffer from way fewer side effects than those who were taking lisinopril. Now at first this wouldn’t make sense, seeing as how both drugs are well tested and do a good job of lowering blood pressure.

Which is the one you should go with?

In some cases there might be specific reasons why more people had side effects with Lisnorpril over Benicar. You can try to make an effort to find out why by speaking with a doctor. But if you don’t want to go through the trouble, then it would seem like taking Benicar for high blood pressure would be the safer route to take.